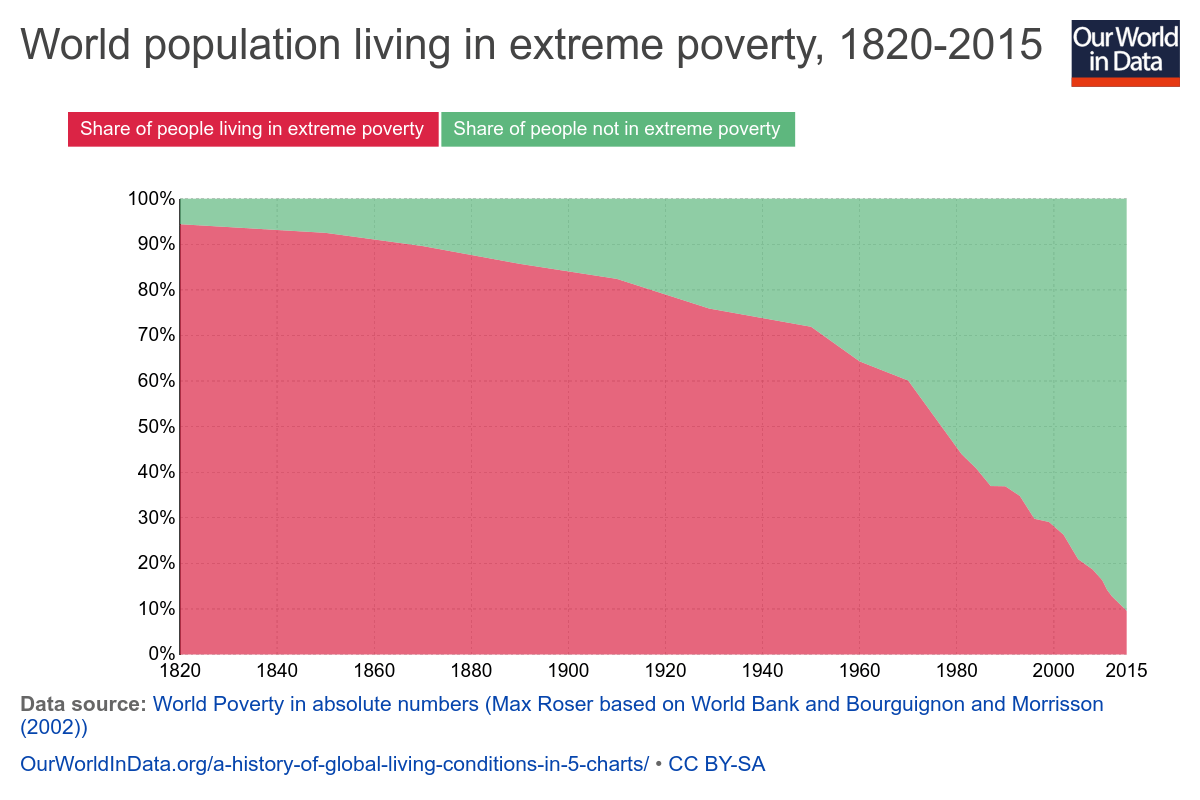 The World Is Getting Better And Nobody Knows About It

As 2016 comes to a close, many people are welcoming the new year with trepidation after a number of incredibly transformative and surprising events during the year.

We saw the people of the United Kingdom decide to leave Europe in the Brexit vote. The USA went to the polls in November after a bitter presidential campaign to vote into power former reality television star Donald Trump.

2016 also seems to be the year the music died. In addition to Bowie, Prince, Glenn Frey, Leonard Cohen, Rick Parfitt and George Michael also passed away.

Towards the end of 2016, President-elect Trump alarmed many by seemingly advocating for a further nuclear arms build up.

You can be forgiven for thinking that we live in incredibly dangerous and reactionary times. We see little in mainstream media which confronts this perspective. The same goes for social media, with fake news proliferating on Facebook and alarmist and fear-mongering content being shared more widely across the platform.

The fault isn’t entirely with mainstream and social media companies for creating a climate of fear and anxiety. Humans, apparently, are a gloomy species and are particularly susceptible to perspectives confirming their bias that the world is getting worse. As one case in point, when asked whether global poverty had increased, remained the same or decreased in the last 30 years, only 12% of Americans correctly answered that it had fallen.

Our gloominess has political consequences. A whopping 81% of Donald Trump voters believed that life has grown worse in the past 50 years, and 61% of Britons voting to leave the European Union believe their children will be worse off than their parents.

Yet the reality is that life is getting much better for the vast majority of humans, and we may be living at the cusp of a global revolution of human thought where ideas can be shared impactfully by any member of humanity, rather than just the elite.

We have evidence that the world is getting unequivocally better. In the face of so much media telling us the opposite, let’s take a look.

Our life expectancy is increasing

Life expectancy around the world has steadily increased over the last 200 years. This has been driven by improvements in housing, sanitation and education, with mortality rates decreasing due to improvements in medicine. The trend continued with the development of vaccines and then antibiotics.

We’re living longer all over the world, giving people the chance to continue contributing to society far into their old age. Many cultures believe that humans become more wise as they get older, ensuring that the amount of ideas being shared will only increase.

Ray Kurzweil has written about a time coming when humans may even merge with machines to solve the problem of death, defeating the limitations of our biology. The data supports his speculation, and it’s interesting to consider the possibilities before us.

“Within a few decades, machine intelligence will surpass human intelligence, leading to The Singularity — technological change so rapid and profound it represents a rupture in the fabric of human history. The implications include the merger of biological and nonbiological intelligence, immortal software-based humans, and ultra-high levels of intelligence that expand outward in the universe at the speed of light.”

Regardless of your perspective on the utility of humanity solving the problem of death, humans are living longer all over the world.

There are less people living in extreme poverty

The longer term view shows us that the countries that are rich today were very poor recently and were worse off than poor countries today.

The chart above shows the estimates for the share of the world population living in extreme poverty. In 1820, only a small portion of the population enjoyed higher standards of living, with the vast majority living in conditions we know of as extreme poverty today.

This is an incredible achievement and deserves to get more focus in how we look at the current state of the world. Before the industrial revolution, the vast majority of people on earth were living in poverty. Now, only a minority live in poverty and that minority is proportionally getting smaller.

A few years ago Ideapod ran an idea sharing salon with the United Nations Population Fund, sharing ideas on how humanity can deal with runaway population growth in the twenty-first century. From the salon, a new paradigm emerged: population growth soon wouldn’t be a problem.

When economies grow, fertility rates decline. Therefore, based on the most current economic projections, human population would to increase to about 9 billion and then start to decline. Population growth in developing countries would mirror that of developed countries. It would increase when people were poor, and decline when people got rich.

The United Nations now expects a slow annual population growth of 0.1 percent at the end of the century, whereas the demographers from the International Institute for Applied Systems Analysis (IIASU), near Vienna, expect an end of population growth around the year 2075.

Almost everyone can read and write

The chart above shows the share of the world population that is literate over the past two centuries. In the past, only a small elite from the population was able to read and write. Now, literacy has become the norm for populations all around the world.

In 1800, there were only 120 million people in the world who could read and write; today there are 6.2 billion people with this same skill.

At Ideapod, we believe that ideas have currency. They are valuable because they express the world as it could be, and through expressing an idea people can come together to collaborate in making it a reality. The invention of communication technologies allows the faster expression and exchange of ideas among the human populations.

Before 1800 there relatively few people who were able to express an idea in ways that would allow the idea to move from person to person. Now, literally billions have access to technology that allows ideas to move quickly in the form of reading and writing.

If you think that science and technology are important for solving the challenges that humans face as a species, you should take heart in the figures above. Literally billions of people can share ideas with each other, and history tells us that solutions to the world’s problems come from the most unexpected places.

So we’re living at a time when our economies are continuing to grow, people are living longer and humans have a greater capacity to communicate and share their ideas.

What are we going to do with this enhanced capacity to connect with each other?

We can now share our ideas on the Internet

The world is becoming more connected, with almost all countries offering some level of connection to the Internet. As Bill Gates says, “the Internet is becoming the town square for the global village of tomorrow.”

Almost all humans have access to the sum stock of human knowledge, and can enter the town square of the global village with the ability to share their ideas. This heralds the beginning of an era of unprecedented innovation, with ideas not just coming from the elite strata of society but from everyone.

Yet the fact that things are getting better does not guarantee that we shouldn’t be concerned with doomsday scenarios. We have been set back by world wars in the past, one of which led to the use of nuclear weapons for the first time. It can happen again. A large-scale financial crisis can bring the global economy to its knees. Climate change threatens ecosystems and can disrupt the lives of millions of people. Terrorists could coordinate a large-scale strike throwing the world into war.

It’s not just the possibility of doomsday events that threatens us; it’s also the fear and anxiety that comes from worrying about them happening. When Matt Ridley, author of The Rational Optimist, is asked what he most worries about, he responds by saying “superstition and bureaucracy”. Superstition because it can obstruct the accumulation of knowledge. Bureaucracy because it can stop us from applying that technology to new technologies and enterprises.

The world is unequivocally getting better. More people need to know this, so that we can create a culture of hope and optimism and ensure the trajectory of progress humans are on will continue. We want to continue creating open societies where new ideas are encouraged and welcomed, even when they challenge conventional thinking.

We are extraordinarily lucky to be alive today, after two centuries of remarkable progress in the living conditions of almost all humans. The future holds remarkable potential, especially as the rate of idea sharing increases.