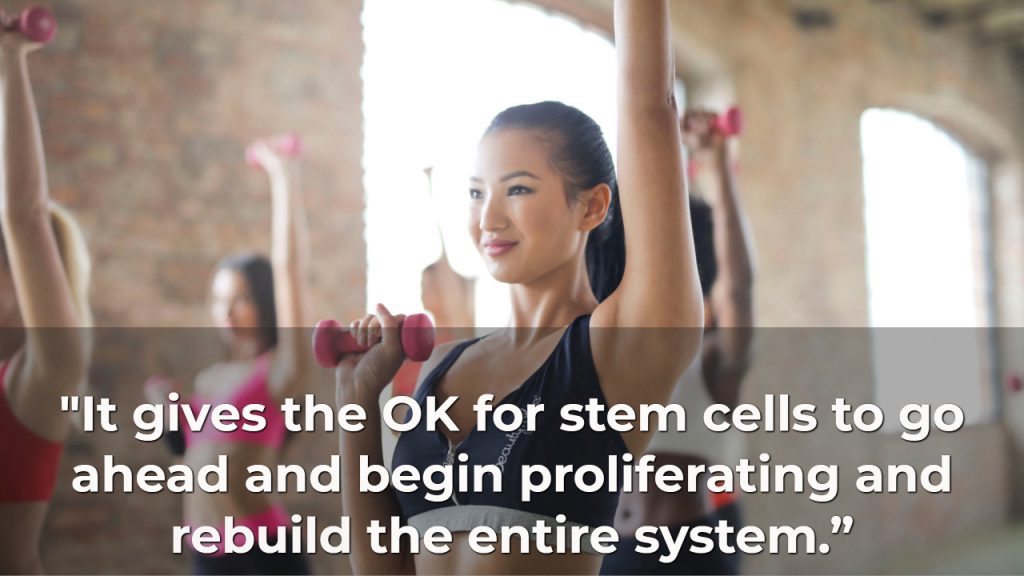 A team of researchers at the University of Southern California have described their breakthrough as “remarkable”.

While diets and fasting have traditionally been criticized by the medical profession as unhealthy and ultimately counterproductive, these research results suggest starving the body kick-starts stem cells into producing new white blood cells, which fight off infection.

The scientists were surprised by their findings

“We could not predict that prolonged fasting would have such a remarkable effect in promoting stem cell-based regeneration of the hematopoietic system,” said Prof Valter Longo, Professor of Gerontology and the Biological Sciences at the University of California.

“When you starve, the system tries to save energy, and one of the things it can do to save energy is to recycle a lot of the immune cells that are not needed, especially those that may be damaged,” Longo said.

“What we started noticing in both our human work and animal work is that the white blood cell count goes down with prolonged fasting. Then when you re-feed, the blood cells come back. So we started thinking, well, where does it come from?”

The implications of these findings are enormous:

With a renewed immune system, we are increasing the chances of a long and healthy life.

In fact, yogis and sages have done this through the ages as we all know. Western medicine is only catching up now.

Why does prolonged fasting work so effectively?

Prolonged fasting forces the body to use stores of glucose, fat and ketones, but it also breaks down a significant portion of white blood cells.

During each cycle of fasting, this depletion of white blood cells induces changes that trigger stem cell-based regeneration of new immune system cells.

In their research, the team from the University of California gathered a group of participants and asked them, in the initial stages, to fast for 2-4 days on a regular basis over a period of six months.

This is where they made a remarkable discovery.

There was a noticeable decrease in the production of the enzyme PKA, a hormone which has been associated with an increased risk of cancer and tumor growth. In addition the immune system of the participants appeared to get renewed.

“PKA is the key gene that needs to shut down in order for these stem cells to switch into regenerative mode. It gives the OK for stem cells to go ahead and begin proliferating and rebuild the entire system,” explained Longo.

“And the good news is that the body got rid of the parts of the system that might be damaged or old, the inefficient parts, during the fasting. Now, if you start with a system heavily damaged by chemotherapy or aging, fasting cycles can generate, literally, a new immune system.”

This is truly an incredible finding.

The research findings suggest that it’s worth trying to go without food for three days to recover your immune system, rather than take expensive and potentially harmful drugs.

Prolonged fasting may mitigate the harmful effects of chemotherapy

Prolonged fasting also protected against toxicity in a pilot clinical trial in which a small group of patients fasted for a 72-hour period prior to chemotherapy, which is good news for cancer patients and others who receive chemotherapy for autoimmune diseases.

“While chemotherapy saves lives, it causes significant collateral damage to the immune system. The results of this study suggest that fasting may mitigate some of the harmful effects of chemotherapy,” said co-author Tanya Dorff, assistant professor of clinical medicine at USC.

She added that more clinical studies are needed, and any such dietary intervention should be undertaken only under the guidance of a physician.

Also, it’s possible that the effects of fasting is not limited to the immune system. Scientists are looking into the possibility that these effects are applicable to many different systems and organs in the body.

Scientists are starting to establish the benefits of fasting to the immune system. What are some of the other benefits you could expect from prolonged fasting?

According to The Stoic Body, you can expect to experience these benefits:

Is prolonged fasting the same as intermittent fasting?

Intermittent fasting means you are introducing a schedule of prolonged fasting into your eating routines.

For example, you may fast for 16 hours per day, only eating within an 8 hour window (eating between 11am and 7pm, fasting between 7pm and 11am the next day). Doing this every day, or 5 days per week, means you are adopting an intermittent fasting schedule.

Prolonged fasting usually refers to fasting for a period of time over 48 hours.