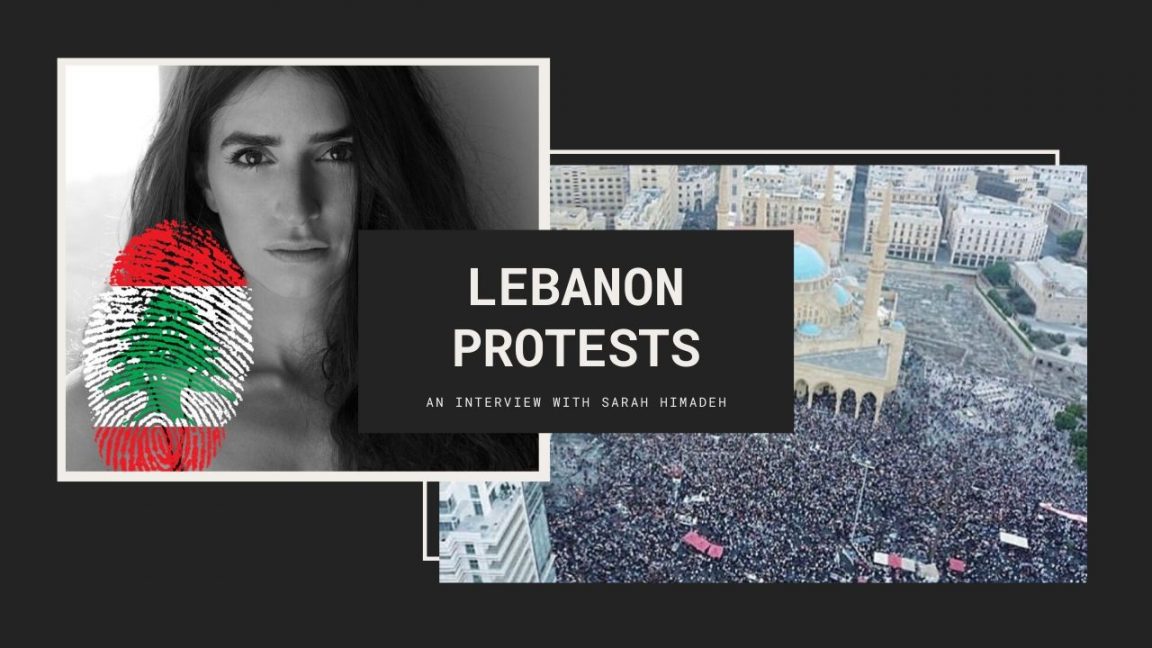 Lebanon protests: Why banging pots has become the symbol of unity

“I’m good, I slept well,” she says. “I needed it. The visceral energy here makes it hard to sleep.”

Lebanese actress Sarah Himadeh had agreed to talk to me early on a Monday morning—me in Toulouse, she in Beirut. Her response to my standard “how are you?” launches us immediately into the depths of a conversation that reflects the character of the protests in Lebanon, with the political inextricable from the minute-to-minute experiences and emotions of people on the ground.

Since the protests began on October 17th, 2019, Himadeh has been deeply involved with direct action in Beirut. Sparked by growing anger at the failure of Lebanon’s sectarian government to manage the country’s economy, with a (quickly scrapped) new tax on messaging apps tipping that anger into action.

We talk about unity, love, sharing food, the beauty of banging pots, and the power of Lebanese women taking the lead.

“This is the first time—and you can ask my parents, my grandparents—that Lebanon has felt unified.” – Sarah Himadeh

Quickly, Himadeh tells me that the relationships being formed between Lebanese people in the thick of the protests are, in themselves, a sign of change. “We’re a very divided people,” she says, “when you meet someone here, you find out their last name to identify their religion and decipher what political party they belong to. Not these days. Now we’re all in it together.”

Lebanon’s population is divided into 18 officially recognized sects: five Islamic sects, 12 Christian sects, and the Jewish community. But Himadeh—along with many others speaking out over the last month—says this division isn’t wanted by the people. Instead, it’s forced on the country by a sectarian political system and corrupt leaders, and by Hezbollah, a militant group and Shia Islamist political party.

The government shares power between Christians, Shia Muslims, and Sunni Muslims; although the reality is divided power, not shared. On October 22nd, 1988, towards the end of the civil war, members of the Parliament of Lebanon pledged to abolish sectarianism in an agreement known as the Taif Accord. But in spite of that promise, the government has remained firmly divided by sect.

Is it possible that these protests will change the government?

“We had a big win yesterday,” says Himadeh, “a lawyer called Melhem Khalaf was elected to lead the Beirut Bar Association.”

Reports stated that moments after Khalaf’s election was announced, lawyers at Beirut’s Justice Palace celebrated, breaking into song and chanting for the revolution. It’s a big deal—because it’s the first time the association will be headed by a lawyer without any political affiliations.

Change is slow, but hope is the driving force behind the continued effort

“There is love and a new sense of hope amongst the Lebanese in the streets. We feel protected by our soldiers, though they have to follow government’s orders. A government with a president who, when sharing his thoughts on the revolution, told us ‘if you’re not happy here, emigrate.’”

Himadeh shares a story about a moment, on around the third day of protests, when soldiers had been ordered to set people aside so that roads could be opened and business could go on as usual. They became violent—“and protestors were talking to them, pleading with them. Then some of the soldiers began to cry, and let the protestors close the road. Because we’re speaking the truth—and it’s the truth for all of us.”

Actually, Himadeh says, she stopped to talk with a guard of soldiers for half an hour on her way home the previous night. “They were protecting the Druze leader who lives down the street. I’m Druze—so are they—but we all agreed it didn’t matter, we are all one. We don’t want to live in a divided country. The government has succeeded in dividing us for so long, but we’ve finally woken up, and there’s no turning back.”

Speaking of following orders, Himadeh points out that “women are at the forefront of this revolution. Soldiers can’t touch women so they form a link,” to protect the areas that protestors are occupying.

I ask her what it means to her to be a part of a movement led by Lebanese women, and she says:

“To me it’s a finally. Women here are incredibly strong and intelligent. And not only are they fully in their power right now, their courage is leading an entire revolution. Not bad, huh?”

On the 13th day of the protests, Hezbollah followers destroyed the movement’s camp in Martyrs’ Square, Beirut. “There was a lot of infrastructure, the whole camp…they destroyed it all,” says Himadeh. “The first person to start clearing up was a woman. More people joined in and gradually we constructed a monument from the wreckage; from the rubbish and broken materials.” Himadeh says the message is symbolic of the whole revolution: “You will not destroy this. We will stand in light amidst your darkness.”

People aren’t only building monuments of rubbish to fight back against destruction and division. Everyday habits are changing too—and there is power in those quiet, peaceful changes.

Levels of harmful air particles in Beirut are three times higher than the safe level, as recommended by the World Health Organisation (WHO). But the National Air Monitoring Network ceased operation in July 2019, causing anger about the lack of government funds committed to public health.

While the salaries and benefits spending of government officials has increased by 7.5% every year for the last ten years, many people in Lebanon still don’t have electricity 24 hours a day, and the annual environment budget stands at $9.3 million—only a little higher than the country’s public transport budget. Bearing in mind that Lebanon has almost no public transport.

But those involved in the protests are using their actions to show that the environment and public health are important to them. “My dear friend, Adib Dada, started planting a native forest next to the Beirut River as a way to reclaim our public space and highlight the pollution of the river,” Himadeh tells me, “he’s been Lebanon’s climate change warrior for years.”

There are other people and organizations doing important work in Lebanon. One of these is called Muwatin Lebnene, and according to Himadeh, “its mission is basically acting upon our civic duty.” It started with one person picking up litter, and grew to more than 600 regular volunteers and thousands more contributors, who have collected rubbish (more than 10.3 tons of it), and picked and sorted half a million cigarette butts and filters.

“This country is covered in litter. A people that isn’t educated to put garbage into a bin, now even recycles.”

How are people on the ground feeling?

“There’s hope, but people are scared to hope.” Himadeh says, “It’s terrifying to open your heart to the possibility of a better Lebanon after years of pain. We’re ready, skeptical, hopeful and scared.”

There is fury towards the resurfacing of corruption, but “no one is turning a blind eye anymore. People are no longer numb. They’ve woken up.” She notes that teenagers and those in their 20s are less sectarian than previous generations with, for example, inter-sect marriages becoming more common. “They’re fed up, and they’re active in the revolution.”

Himadeh tells me that when 171 thousand people formed a human chain across Lebanon—an event widely reported in the global press—people from the north sent food along the chain to those in the south. “They made manakish, a traditional breakfast here, it’s a flatbread with olive oil, sesame seeds and herbs, and sent it through the human chain.” (Click here to see the human chain.)

“The north has never been connected to the south. But it is now.” And Tripoli, a city that has been so segregated—“it’s now leading the revolution. It’s amazing how the city so powerfully embraced its difference. Tripoli is our North Star.”

Then Himadeh speaks about an old tradition that has been revived and reimagined by protestors in Beirut. Many years ago, people would use pots to kill the locusts that would come in swarms, and now “here, at eight o’clock every night people bang their pots, and it represents the people’s voice, people wanting to be heard, people being hungry.” She says there are many meanings to it; but at the same time each day, “you get on your balcony and start banging your pot and all of a sudden there’s a symphony of pots banging…who’d have thought banging pots would bring so much joy and connection.

“It’s actually quite romantic, when you’re playing music and connecting with another and you don’t know where that person is, you don’t see the other person…it’s mysterious, and there’s a connection between all of us in this symphony.”

This expression of togetherness is one of many that Himadeh touches on. Unity is the focus of the conversation—not violence and not hate, and not fear. She wants to share the power of seemingly small acts of connection and support that mean so much in a place where those acts have been so rare between people from different backgrounds.

In spite of the determined peacefulness of protestors, there has, of course, been violence. We talk about Alaa Abou Fakher, the protestor who was shot dead on November 12th by an army officer in Choueifat, a town south of Beirut. The Lebanese army reported that the shooter had later been arrested. Although her sadness is evident, Himadeh pulls me back to the evidence of community and love that arose even from death. “The whole country mourned his death, for days,” she says, “and his children have been offered scholarships for school and university. People really are coming together.”

“Lebanon is a beautiful example of how peace and love are the most important weapons.” – Sarah Himadeh

She goes on: “It sounds like a cliché when you’re not in it—but here you see people dancing, singing, painting in the streets, starting initiatives, peacefully fighting for basic human rights, together. All together. Protestors offering roses to soldiers. Sharing food.”

It’s unclear how long the protests will continue, or whether the direct action will force sustainable change on the Lebanese government. But Himadeh, and others alongside her, remain motivated by hope.

“When you see the government desperately trying to divide us in any way possible; with threats, violence, scarcity; and you see people standing together for the first time in living memory, you truly see the power of love.” 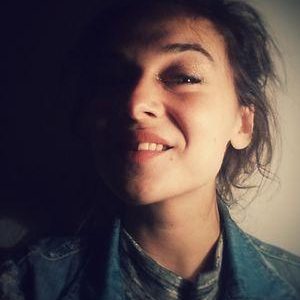