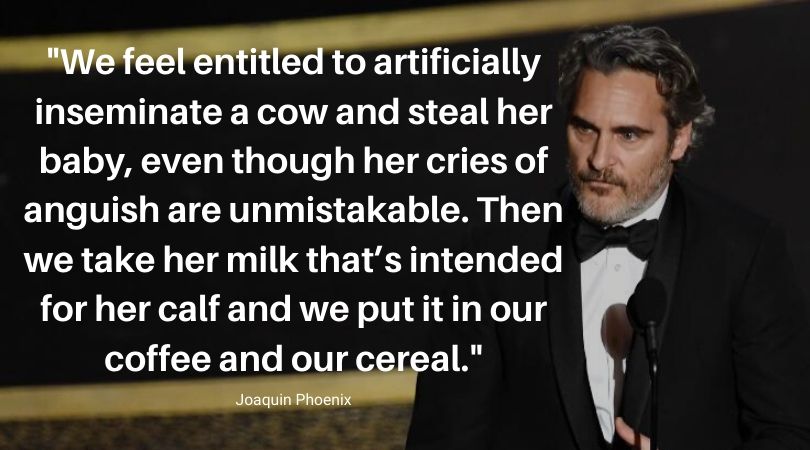 Joaquin Phoenix’s Oscars speech: ‘We feel entitled to artificially inseminate a cow and steal her baby’

The actor who hates award ceremonies

Joaquin Phoenix has been very vocal about his distaste for the award season shenanigans.

In a 2012 interview with Interview Magazine, he explains:

“I’m just saying that I think it’s bullshit. I think it’s total, utter bullshit and I don’t want to be a part of it. I don’t believe in it. It’s a carrot, but it’s the worst-tasting carrot I’ve ever tasted in my whole life. I don’t want this carrot.

“Pitting people against each other . . . It’s the stupidest thing in the whole world. It was one of the most uncomfortable periods of my life when Walk the Line was going through all the awards stuff and all that. I never want to have that experience again. I don’t know how to explain it—and it’s not like I’m in this place where I think I’m just above it—but I just don’t ever want to get comfortable with that part of things.”

Fast forward to the 2020 Oscars Awards ceremony, and it looks like the talented actor has finally come to terms with the inevitability of it. After all, part of being a successful actor is gaining recognition for it.

As he accepted his award for playing the damaged clown Arthur Fleck in Joker, Phoneix took the opportunity to emphasize our fight for equality.

According to Phoenix, whether our personal fight is against racism, gender equality, “we’re talking about the fight against injustice.” That at the core of it, all of these issues have one similarity—it affects us all.

“I think we’ve become very disconnected from the natural world. Many of us are guilty of an egocentric world view, and we believe that we’re the centre of the universe. We go into the natural world and we plunder it for its resources. We feel entitled to artificially inseminate a cow and steal her baby, even though her cries of anguish are unmistakeable. Then we take her milk that’s intended for her calf and we put it in our coffee and our cereal.”

“We fear the idea of personal change, because we think we need to sacrifice something; to give something up. But human beings at our best are so creative and inventive, and we can create, develop and implement systems of change that are beneficial to all sentient beings and the environment.”

But he believes that this is only achievable through supporting each other, no matter how different we all think we are.

Phoenix then ends his speech—making us all bawl some more—by quoting his departed brother River Phoenix:

“When he was 17, my brother [River] wrote this lyric. He said: “run to the rescue with love and peace will follow.”

The most political moments of the 2020 Oscars

Phoenix’s moment wasn’t the only one that created a political statement at this year’s Academy Awards.

Everything from Parasite’s best-picture win (the first non-English language movie to do so) to Natalie Portman sewing the names of snubbed female directors on her red-carpet dress, A-listers and movie-makers alike grabbed various opportunities to throw shade or shine a light on the issues close to their hearts.

Brad Pitt, who just won best supporting actor for his role in Once Upon a Time…in Hollywood, took a shot at the Donald Trump impeachment trial, saying:

“They told me I only had 45 seconds this year, which is 45 seconds more than the Senate gave John Bolton this week…

“I’m thinking maybe Quentin [Tarantino] does a movie about it. In the end, the adults do the right thing.”

American Factory codirector Julia Reichert also spoke about the plight of the working class while making her acceptance speech for best documentary:

“Working people have it harder and harder these days, and we believe that things will get better when workers of the world unite.”

Which earned a sweet tweet from President Barack Obama:

Congrats to Julia and Steven, the filmmakers behind American Factory, for telling such a complex, moving story about the very human consequences of wrenching economic change. Glad to see two talented and downright good people take home the Oscar for Higher Ground’s first release. https://t.co/W4AZ68iWoY

In a world of fake reality TV stars and celebrities who are too “afraid” to get political, the 2020 Oscars just proved that we just might have celebrities worth listening to.