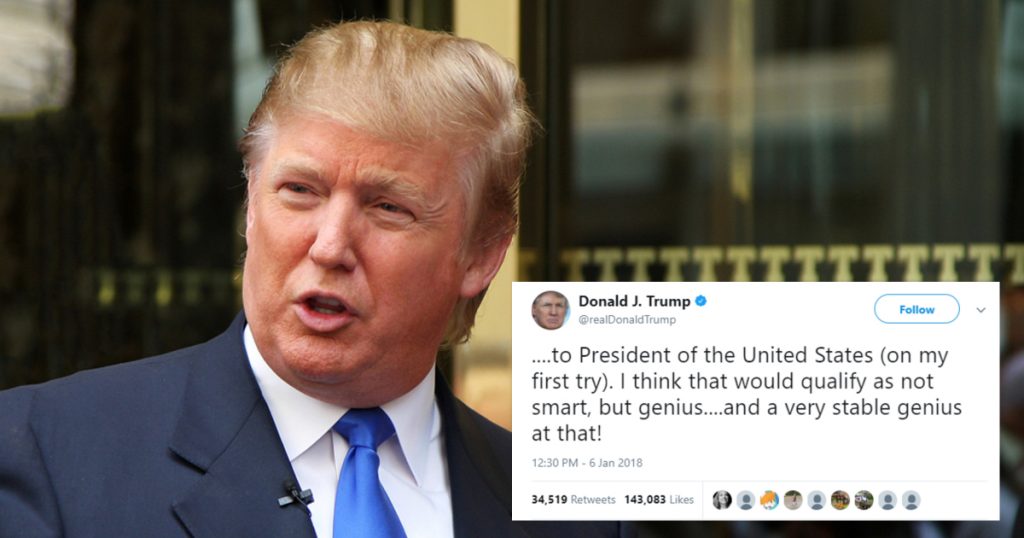 Here’s how highly intelligent people actually talk about themselves

In the wake of Donald Trump’s very public declaration on Twitter about his superior intelligence, one experienced journalist reminisces about what he knows of very smart people how they usually talk about themselves.

….Actually, throughout my life, my two greatest assets have been mental stability and being, like, really smart. Crooked Hillary Clinton also played these cards very hard and, as everyone knows, went down in flames. I went from VERY successful businessman, to top T.V. Star…..

….to President of the United States (on my first try). I think that would qualify as not smart, but genius….and a very stable genius at that!

James Fallows, a national correspondent for The Atlantic, has personally known his fair share of famously intelligent people. He has interviewed Nobel Prize winners, American presidents (he was President Carter’s main speechwriter) and tech luminaries like Bill Gates, Steve Jobs and Elon Musk.

One may conclude he knows a little about how very smart people conduct themselves.

There are a few prominent exceptions of talented people who annoyingly go out of their way to announce that fact, says Fallows pointing to Muhammad Ali as the exception illustrating the rule. He said he was “The Greatest”, and was.

This is an astute observation.

I once attended a guided tour in a museum and noticed one of our esteemed professors moving right to the front of the line. When I asked him why he did that, his answer was that he knows nothing about the subject and wanted to make sure he hears everything the guide has to say. I thought that was amazing.

In my experience very smart people are acutely aware of what they are not capable of and they’re not shy to admit it either.

This includes admitting to “the specific areas of weakness—social awkwardness, musical tin ear, being stronger with numbers than with words, or vice versa; and the incomparable vastness of what any individual person can never know.”

“To read books seriously is to be staggered by the knowledge of how many more books will remain beyond your ken. It’s like looking up at the star-filled sky,” writes Fallows.

We can think of exceptions, but generally the cliché is true:

The clearest mark of intelligence, even “genius,” is awareness of one’s limits and ignorance.

For the most part people who are super intelligent don’t have to announce the fact, it reveals itself naturally over time. It stands revealed for everyone to see.

The thing is, highly intelligent people realize that it’s arrogant to go around telling everyone you’re a genius – it alienates others who may feel at a disadvantage in the company of someone who is clearly much more intelligent than they are.

Jon Hilderbrand has this to say  about the subject on Quora: “Why would a genius want to announce it anyway? That would certainly make me wonder, not just about his intelligence, but his social skills and personal security.”

RELATED ARTICLE: If you have these 10 traits, you’re highly intelligent (according to science)