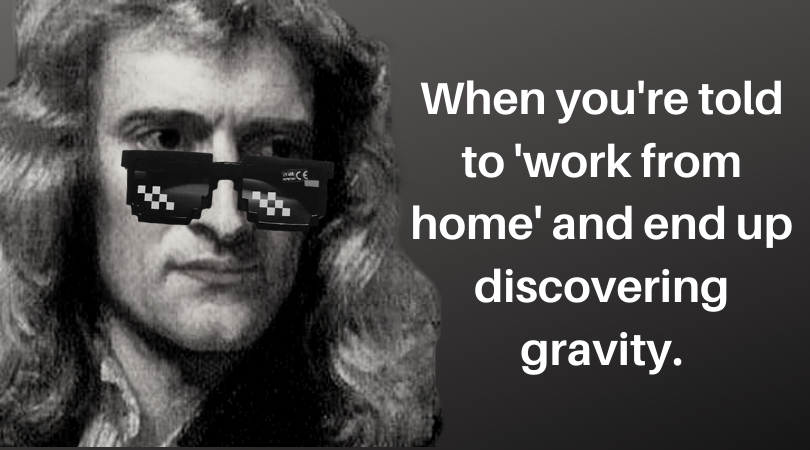 During a pandemic, Isaac Newton was in lockdown, too. He used his time wisely

Let’s take Sir Isaac Newton, for example. During a pandemic, he had to work from home, too. But while most of us are spending our time glued to our smartphones, Newton was writing theories on gravity, calculus, and optics.

So if you want to feel inspired and motivated to utilize your isolation time more productively, read ahead.

The Great Plague of London

When the Great Plague of London occurred, renowned physicist Isaac Newton would have been in his early 20’s. He was then, by all accounts, just your regular student at Trinity College, Cambridge.

It would later take 200 years to discover the bacteria that causes the plague. But back then, governments took relatively the same measures as social distancing today—closing schools and businesses and decreasing travel.

When Cambridge closed its doors around 1665, Newton went home to the family estate, Woolsthorpe Manor, to continue his studies on his own.

And it turns out, the isolation did wonders for his studies. With no guidance but his own instincts, Newton’s studies thrived. The two-something years he spent away was later considered his annus mirabilis, or “the year of wonders.”

In 1665, the University of Cambridge temporarily closed due to an outbreak of the bubonic plague.

As a result, Isaac Newton had to work from home. He used the time to develop calculus and the theory of gravity.

First Newton continued his work in mathematics. That same year, he took his generalised binomial theorem and used it to develop his early calculus.

Then he moved on to optics. He got himself a few prisms and studied them in his bedroom. His experiments went as far as creating a hole in his shutters, so he could let a small beam of light through.

Outside his bedroom window, there was the apple tree—yes, the one where Newton was famously bonked on the head by an apple, creating that “aha!” moment when he understood gravity and motion.

It turns out, the tale has been a little “flavored” through the ages. But there may be some truth to it.

“…Whilst he was musing in a garden it came into his thought that the same power of gravity (which made an apple fall from the tree to the ground) was not limited to a certain distance from the earth but must extend much farther than was usually thought. ‘Why not as high as the Moon?’ said he to himself…”

Outside his home, the Black Plague continued to ravage lives. It ended up taking a quarter of London’s population and became the last major outbreak in the 400 years of the Bubonic Plague.

But when it stopped, and Cambridge opened its doors in 1667, Newton had a lot to show for.

From being an ‘undistinguished’ student, Isaac Newton suddenly became the star pupil. In the following six months—six—he became a fellow. Two years later, he became a professor.

And the rest, as they say, is history.

So if you’re feeling a little down while in quarantine, perhaps you should consider what Newton made out of his own experience. Perhaps right now, to you, the following weeks mean staring at the walls of your room, wondering when the world will be back to normal again. But if you instead use that time musing, working, and creating—who knows?

You might just make history too, all while wearing your days-old sweats.