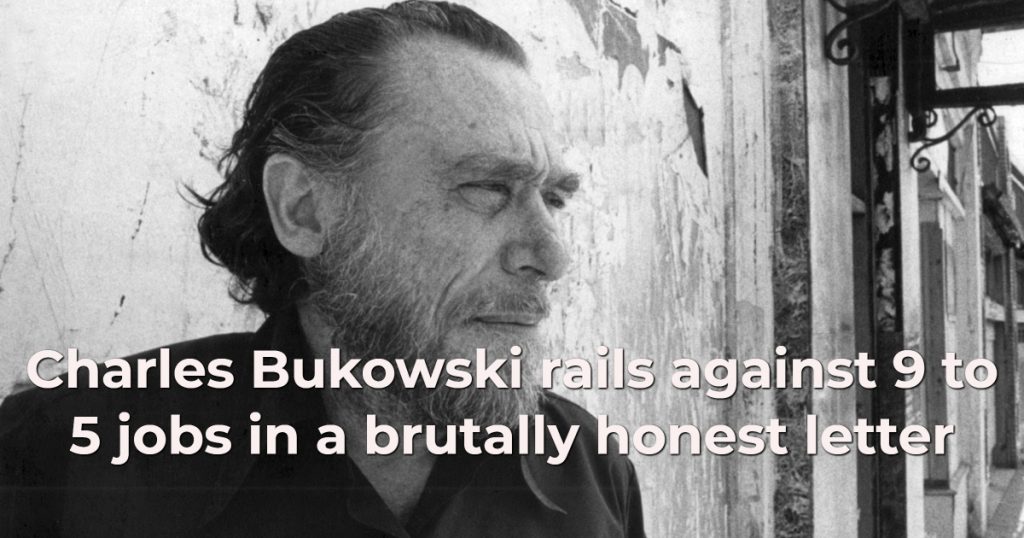 Charles Bukowski rails against 9 to 5 jobs in a brutally honest letter, sees it as “slavery”

Charles Bukowski cultivated a heroic image as a literary icon who was also a perennial drunken deadbeat.

His image was deserved. Not only did he produce works of art that have profoundly shaped the literary landscape and the minds of millions, he was also an alcoholic.

Yet something that is not so well known is that at one point in his life, Bukowksi worked a 9 to 5 job for the United States Post Office. Beginning in the early 1950s, he was a fill-in letter carrier, and then for the next decade was a filing clerk.

In 1969, Black Sparrow Press publisher John Martin offered him $100 a month for life on the condition that he quit his job and write full time. Fifteen years later, Bukowski was so grateful that he wrote the below letter to Martin, expressing his gratitude with his characteristically brutal honesty.

The gist of the letter is mentioned this passage:

“Slavery was never abolished, it was only extended to include all the colors.”

Here’s the letter in full. What do you think? Does it relate to your experience or working a 9 to 5 job?

Thanks for the good letter. I don’t think it hurts, sometimes, to remember where you came from. You know the places where I came from. Even the people who try to write about that or make films about it, they don’t get it right. They call it “9 to 5.” It’s never 9 to 5, there’s no free lunch break at those places, in fact, at many of them in order to keep your job you don’t take lunch. Then there’s OVERTIME and the books never seem to get the overtime right and if you complain about that, there’s another sucker to take your place.

You know my old saying, “Slavery was never abolished, it was only extended to include all the colors.”

And what hurts is the steadily diminishing humanity of those fighting to hold jobs they don’t want but fear the alternative worse. People simply empty out. They are bodies with fearful and obedient minds. The color leaves the eye. The voice becomes ugly. And the body. The hair. The fingernails. The shoes. Everything does.

As a young man I could not believe that people could give their lives over to those conditions. As an old man, I still can’t believe it. What do they do it for? Sex? TV? An automobile on monthly payments? Or children? Children who are just going to do the same things that they did?

Early on, when I was quite young and going from job to job I was foolish enough to sometimes speak to my fellow workers: “Hey, the boss can come in here at any moment and lay all of us off, just like that, don’t you realize that?”

They would just look at me. I was posing something that they didn’t want to enter their minds.

Now in industry, there are vast layoffs (steel mills dead, technical changes in other factors of the work place). They are layed off by the hundreds of thousands and their faces are stunned:

I just wrote in disgust against it all, it was a relief to get the shit out of my system. And now that I’m here, a so-called professional writer, after giving the first 50 years away, I’ve found out that there are other disgusts beyond the system.

I remember once, working as a packer in this lighting fixture company, one of the packers suddenly said: “I’ll never be free!”

One of the bosses was walking by (his name was Morrie) and he let out this delicious cackle of a laugh, enjoying the fact that this fellow was trapped for life.

So, the luck I finally had in getting out of those places, no matter how long it took, has given me a kind of joy, the jolly joy of the miracle. I now write from an old mind and an old body, long beyond the time when most men would ever think of continuing such a thing, but since I started so late I owe it to myself to continue, and when the words begin to falter and I must be helped up stairways and I can no longer tell a bluebird from a paperclip, I still feel that something in me is going to remember (no matter how far I’m gone) how I’ve come through the murder and the mess and the moil, to at least a generous way to die.

To not to have entirely wasted one’s life seems to be a worthy accomplishment, if only for myself.