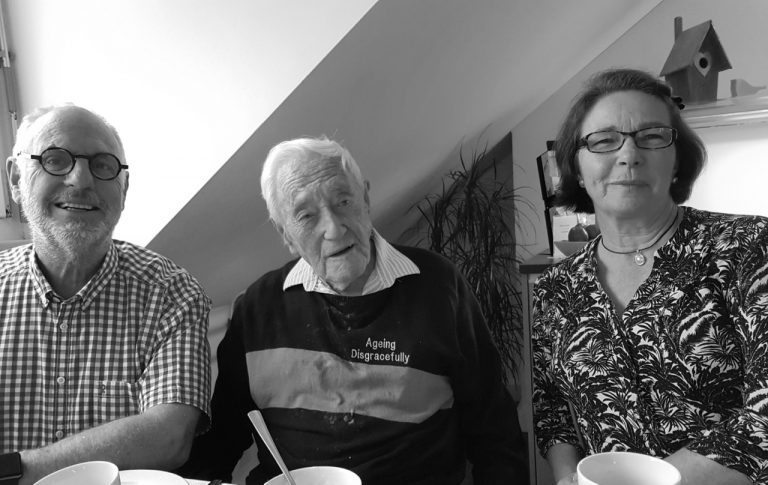 As I write this article, I’m listening to Beethoven’s Ode to Joy. If you have headphones nearby, I encourage you to click the play button below and listen along with me.

The reason for this is that Australia’s oldest scientist, David Goodall, chose to end his life last week at the age of 104 surrounded by family while listening to Ode to Joy.

The British born scientist was forced to travel to Switzerland on a one-way ticket to end his life where liberal laws around assisted dying allowed him to end his life legally. This is in contrast to his home country of Australia where it remains forbidden.

In his final hours, according to the Guardian, Goodall enjoyed his favorite meal of fish and chips with cheesecake. With only minutes to go, he listened to Beethoven’s Ninth Symphony, famous for its last movement Ode to Joy, before passing away shortly after the piece of music finished.

Goodall was a botanist and ecologist. He was influential in the early development of statistical methods in plant communities. Still active past the age of 100, he was known as Australia’s oldest working scientist.

Goodall’s decision to end his own life has raised the question about the ethics of voluntary euthanasia. It’s an issue shrouded with much ambiguity and confusion and has been at the center of heated debate for many years. The question is surrounded with many religious, ethical and practical considerations.

In the Out of the Box Facebook group, we’re asking the members to reflect on how they would like to leave their lives behind when the time comes.

Goodall’s final moments were characterized with formal paperwork that visibly frustrated the scientist, who said: “What are we waiting for?”

Dr. Philip Nitschke, the founder of the Australian right-to-die group Exit International, was with Goodall when he passed away.

To end his own life, Goodall had to turn a wheel that administered a lethal concoction to flow into his arm through a cannula. Nitschke said the professor did this “after answering questions which said he knew who he was, where he was and what he was about to do, and he answered these questions with great clarity. In fact his last words were: This is taking an awfully long time!’”

Asisted dying is legal in Switzerland, the Netherlands, Luxembourg, Canada and some parts of the US.

Goodall had been campaigning for his home country of Australia to follow suit and make it legal for people to end their own lives.

“What I would like,” Goodall said, “is for other countries to follow Switzerland’s lead and make these facilities available to all clients, if they meet the requirements, and the requirements not just of age, but of mental capacity.”

Goodall was not terminally ill but his eyesight and mobility had considerably deteriorated in recent years. According to Goodall, his life has stopped being enjoyable “five or 10 years ago.”

His case caused controversy in Australia, with his doctors threatening to prevent him from leaving the country

Goodall flew from Perth, where his daughter, son and grandchildren live, to France to see relatives the week before his death in Switzerland.

Doctors in Perth at one point threatened to stop him from flying to Switzerland.

His final day was spent exploring Basel University’s botanic gardens with three of his grandchildren, who said they were proud of his bravery in the face of great public outcry over his decision. They reportedly were glad Goodall decided to die on his own terms.

At his final press conference, Goodall wore a pullover printed with the words “Ageing Disgracefully” and sang a few bars of Ode to Joy. He said he would have preferred to die in Australia.

“Luckily my family who are in various parts of Europe and America have rallied round and come to see me, and I welcome the opportunity to see them, which I probably wouldn’t have had if I hadn’t pursued this Swiss option,” he told journalists.

He appeared bemused by public interest in his case. “At my age, or less than my age, one wants to be free to choose the death when the death is at an appropriate time,” Goodall said.

There was significant criticism of Dr. Goodall’s decision to take his own life.

The Australian Medical Association’s president, Dr. Michael Gannon, says he was concerned that the “suicide of someone who’s aged 100” was being celebrated.

“What is the age at which we no longer celebrate people continuing life?” he asked. “People like Dr Goodall make a decision based on nothing more than they’ve decided there’s nothing more to live for. I think that’s a dangerous line to cross.”

He continued: “I have serious concerns about a community where we make arbitrary decisions about whose life is valuable enough to continue and whose should be ended under the law.”

Traditionally, the most vocal opposition to any form of assisted dying has been the Christian (and particularly the Catholic) Church. But Catholics are divided on interpretations of what end-of-life care should look like.

As John Paris, a Jesuit priest and a bioethicist at Boston College, put it, the standard Catholic view of end-of-life care, that “life is a gift from God and the determination of life is for God to make,” worked “perfectly fine” until the 13th century, when medieval technological and medical advances began to change the nature of what medical care and intervention meant.

The worry, Paris says, is that life will be seen as something that is only worth living when certain conditions are met. When this is the case, life isn’t any longer seen as worthwhile for its own sake.

“What kind of a society wants to do that? Life is made simply an option that you have when you’re happy. But if you become distressed or depressed you can end it. You shouldn’t have to suffer for anything,” he says.

For Catholics, says Paris, suffering is seen as a natural if undesirable part of life.

Spiked Online journalist Brendan O’Neill expressed a similar critique from a non-religious perspective. In a popular 2010 article he said that political correctness was getting in the way of expressing a contrarian view when it comes to the right to die:

“It has now reached a level where if you tell someone that you have liberal instincts, humanist tendencies, and you don’t follow any religious faith, they will automatically assume that you are in favour of legalising assisted suicide. There is almost an unspoken, nudge-nudge agreement amongst a certain section of society that this is a just and righteous campaign: you read the Guardian, you shop at Waitrose, you go to the National Theatre, you support assisted dying.”

O’Neill’s has two main objections to assisted dying. First, he argues, it brings an intensely personal sphere into the world of bureaucracies and tribunals, causing a great deal of unnecessary suffering for the dying. Second, he says, it fosters a culture where those who are terminally ill, or disabled, might be led to believe that their own lives — or indeed, life for its own sake — is not valued.

“It’s very important that society doesn’t give the green light to suicide,” he told Vox by telephone. “That life is worth living, however difficult it might be … is valuable.” Saying to people, “Well, maybe your life isn’t worth living and maybe you should give up,” is an example of what he calls “moral defeatism.”

Yet this question strikes at the heart of the kind of society we want to live in, and how we collectively understand the meaning of life. Traditionally, we have relied on theistic traditions to assert that life has value and should be preserved because it is a “gift from God”. We haven’t necessarily come to a conclusion about what life means in the absence of a theistic tradition. Is life essentially a biological accident, a neutral phenomenon? Can we enshrine the “sanctity of life” in the codes of society without relying on religion uphold it?

Whatever your perspective on the issue, it’s a fascinating question.

We’re having a conversation in our Facebook group for Out of the Box about the decisions people make in how they live their life the state of their lives upon death.

The shaman Rudá Iandé, co-creator of Out of the Box, has asked the community to post their thoughts in response to the following question:

“Imagine your body, your identity, your name as a box. There is a moment when the box will cease existing for everyone. How would you like to leave your box when your time comes?”