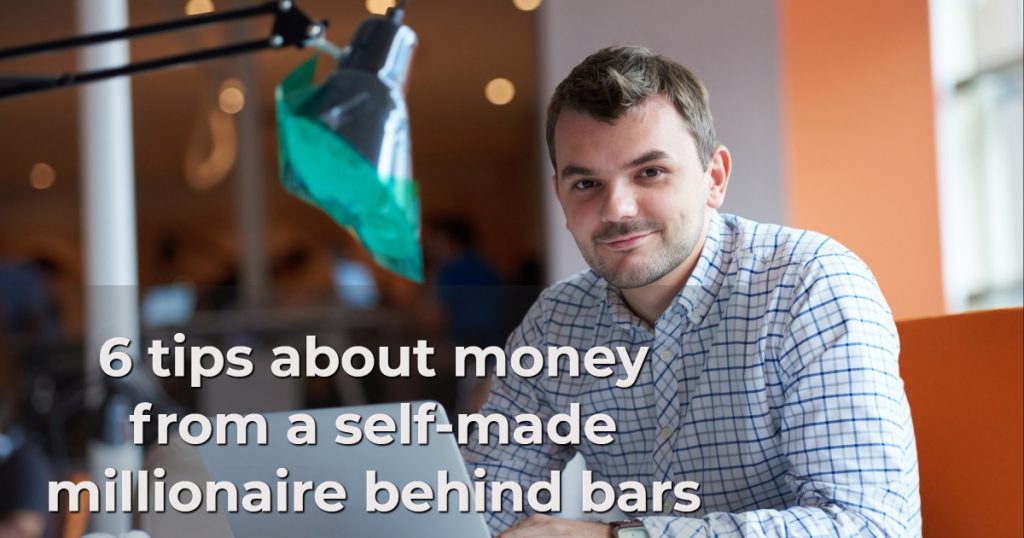 6 tips about money from a self-made millionaire behind bars

Curtis Carroll is a sought-after and respected financial advisor whose insights into investing and trading stock have earned him the nickname “Wall Street,” or “Street” for short, writes Ari Surdoval.

Carroll didn’t attend Harvard. He taught himself how the stock market works and he has developed a curriculum that teaches ordinary folks how to buy stocks and make money.

He is doing this from behind bars in San Quentin.

When Carroll entered the prison at age 17 he was illiterate. That changed when one day, at age 20, he reached for the sports pages of a newspaper and took hold of the financial pages instead.

“And this old man said, ‘Hey youngster, you pick stocks?’ And I said, ‘What’s that?’ He said, ‘That’s the place where white folks keep all their money,” Carroll told his TED audience.

He added that that was the first time in his life that he saw a glimpse of hope.

He realized that if he could read, he could find out about those rich folks and that place where they keep all their money.

So he proceeded to learn to read and write and progressed from there to a self-made money man.

Carroll shares with his audience that according to the California Department of Corrections, more than 70 % of those incarcerated have committed or have been charged with money-related crimes: robberies, burglaries, fraud, larceny, extortion. And although they earn 30 cents an hour in the California prison system and have no real expenses, they don’t save.

If you think that that’s because they know no better, you might be right, but look at this statistic that Carrol also mentions about people like you and me: according to MarketWatch, over 60 % of the American population has under 1,000 dollars in savings.

Looks like we can all do with some basic financial advice, so let’s see what the self-made money man suggests.

“When trading, you hold onto a stock for a short period of time, but if you’re investing in a company, you have to have a long-term approach, because your money is going to be tied up with that company for many years,” Carrol told Surdoval.

Carroll advises older people (as many of the incarcerated folks are) to focus on trading, because it’s unlikely that they would make enough money investing.

“Trading gives them a lot more education and practical experience while it brings in income. Then, if they decide to invest, they’ll have much more knowledge about what to look for and how to invest wisely.”

“Successful investing and trading are about trying to figure out three things: Is the stock overpriced, underpriced or fairly priced? That’s it,” says Carroll.

To make this assessment, you need to find out everything you can about the company. What kind of company is it; how long ago it was founded; what are its products or services; how many employees does it have; what is the company’s revenue, profits, debt and market cap?

After all, if someone walked up to you and asked to borrow money, you will most certainly find out as much as you can about that person before you consider a transaction. You’d want to know what the person needs if for and when it’s going to be paid back.

You want to know the same things about companies you invest in, says Carroll.

Carrol believes 90 % of the markets trade on emotion and that’s not the way to go.

“Never follow the herd, because the herd follows emotions. It’s easy to know where the herd is because you’ll see stock prices rise very rapidly in a very short period of time based on information that has little to do with facts.”

4) Find out the real numbers first

“Stocks historically move based upon earnings calls. When the end of, say, the first quarter comes, and companies announce earnings, large investors like mutual funds and hedge funds buy stock based on that, and increases through the quarter are sustained based on the amount of revenue earned that quarter. The next quarter, the same thing. But when you see rapid increases or decreases in a stock in the middle of a quarter, be wary and don’t rush to invest. Wait for the announcements. If the numbers don’t come out the way they’re supposed to or if they miss expectations but beat their own projections, the stock prices can still fall.”

“Buying large blocks of shares is how you can build wealth and portfolios, but regular people don’t have that kind of ready cash. Carrol says if you have a couple thousand dollars to invest you’re better off buying larger amounts of stock from smaller companies, even though they are more volatile.

This is how he reasons and it makes complete sense.

“For example, if I bought a thousand shares of Apple right now, I’d have to spend around $168,000. If Apple stock jumps three dollars, I make three grand — but I had to spend $168,000 to make that. That is a return on investment of less than 2 percent.

“Trading lets you learn the markets, earn money and actively create and manage different strategies for your success. It’s what allows you to take ownership of your own life and your overall livelihood. That’s what I consider good risk.”